Windham is perhaps best known as the site of the “Ravenna Arsenal” established on 21,427 acres of Portage County property, including 5,700 acres from Windham Township, in 1940 at the onset of World War II. The Arsenal was one of sixty plants nationwide that manufactured a variety of conventional ammunition for the war effort. The Arsenal was also utilized during the Korean and Vietnam Wars.

Windham’s first settlers were a group of sixteen men known as the “Beckett Company,” who traveled from Becket, Massachusetts in 1811 to an area known as the “Connecticut Western Reserve” settling in an unoccupied township south of what is known today as Nelson Township, Ohio. This land was claimed by the State of Connecticut, with its location in the Northwest Territory in what is now northeastern Ohio.

Windham was first known as Strongsburg, then renamed Sharon, but eventually christened Windham in 1820 in honor of Windham, Connecticut, the original home of the Beckett Company settlers. Originally established as a township, the Village of Windham was incorporated with the State of Ohio in 1892 and remained part of the Township for over 100 years until the County Prosecutor determined that inside millage tax revenues would be lost if the corporate limits of the Village and the Township were not separated. This Separation Agreement was approved by the Portage County Commissioners in 1993. 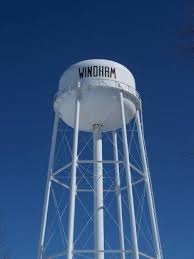