Concord Twp., in Lake County, is approximately 30 miles East of Downtown Cleveland and all it has to offer and is the home of the new Tri Pointe Hospital, part of Lake Hospital Systems.

In 1805 Concord became part of Geauga County when that county was created. At the March, 1822 meeting ordered by the Geauga County Commissioners, the Township to be know as Concord, in honor of the Revolutionary War battle site, was separated from Painesville Twp. On August 22, 1831, Daniel and Elizabeth Coit of Norwich Connecticut deeded to the Trustees of Concord Twp. and their successors forever the Concord Twp. Public Ground located on the corner of Old Route State 44 and state Route 608. The property that was referred to as the Commons was to be used for the benefit of the citizens of Concord Twp. For the sum of one dollar, the property now occupied by Concord Town Hall, Fire Station One and the Gazebo, became the site of Concord’s government.

In March of 1840, Lake County was separated from Geauga County so that the formal government of organization of Concord Twp., Lake County, Ohio, United States of America was completed.

Concord Twp. and nearby Attractions

Historic Downtown Willoughby known for its’ restaurants and nightlife

Rock and Roll Hall of Fame and Museum 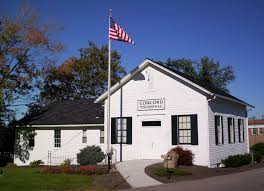