History of the Village

The Village of Newburgh Heights incorporated in 1904 originally was part of the township of Newburgh, an early population and economic center. The early township was bounded by Cleveland on the north, Warrensville Township on the east, Independence on the south and the Cuyahoga River on the west. This old Newburgh Township was on higher ground than Cleveland and became an economic power. Only the choice of Cleveland as the county seat in 1809 changed its fortunes. Newburgh slowly eroded through annexation to Cleveland, East Cleveland Township and Independence Township in 1823, 1873, 1874, 1878, 1893, and 1894. Part of the economic power of the region started in 1857, with the establishment of Cleveland Rolling Mill. Welsh, Irish, Polish, German and Czech mill workers added to the ethnic fabric of the area originally settled by New England and Manx settlers.

The area leftover after annexation became 1904’s Village of Newburgh Heights.  This Village also fell victim to size reduction as the Township of South Newburgh organized in 1904 (to become known as Garfield Heights) and the Township of Corlett organized in 1906.  In 1917 Newburgh Heights had a building boom; farms were subdivided into residential lots, taxes rose, and a group of residents seceded forming the Village of Willow (to become Cuyahoga Heights) in 1918. The new boundaries left the residential area in Newburgh Heights (about 1 acre) and the farmland and industrial area in Cuyahoga Heights (about 5 acres). The current Village of Newburgh Heights was formed, a 0.5 square mile residential community south of Cleveland between the industrial valley of the Cuyahoga River on the west, Harvard Avenue and the village of Cuyahoga Heights to the south, and East 55thStreet of Cleveland’s Slavic Village to the East and Cleveland’s Raus Park and Metropark’s Washington Park to the North.

Golf and nature in the heart of the city

Washington Golf Course is the highlight of Cleveland Metroparks Washington Reservation in the cities of Newburgh Heights and Cleveland. The 9-hole, par 29 golf course and 30-station driving range opened in the spring of 2006. 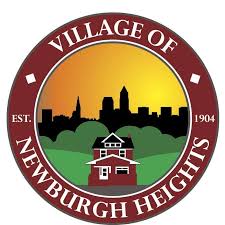